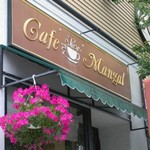 Turkey is a diverse melting pot of social and culinary values. Turkish cuisine has a long and rich history from its Central Asian roots to its refinement under the Ottoman Empire and has influenced culinary tradition throughout the Middle East and the Mediterranean.

Our family back in Turkey has been involved in the food business since the 19th century. We have lived all over Anatolia in villages, small towns, and big cities. As a result, we have had the chance to learn and know a wide variety of Turkish food.

In addition, we have traveled extensively in Europe, Asia, the Far East, the Middle East, Africa, and the Americas, which has given us a chance to try other cuisines as well. The world is smaller now in this information age. Accordingly, people are closer to each other. We are here, and very pleased to have served you since 2000. We hope to continue serving you for many many years ahead.

Our name Café Mangal comes from a cooking implement in Turkey called Mangal (seen left), similar to a braising pot in France. The area around it signifies a warm gathering spot to hang out around and socialize while the meal is being cooked and coffee brewed in front of you.

We want you to experience the warmth of our hospitality. We want our customers to feel comfortable and enjoy the good food, excellent coffee, and fine teas.

Q Is your restaurant open?

Our dining room is open for lunch with socially distanced tables from 11am to 4pm Monday thru Saturday.

Choose a Plan to Claim Your Business